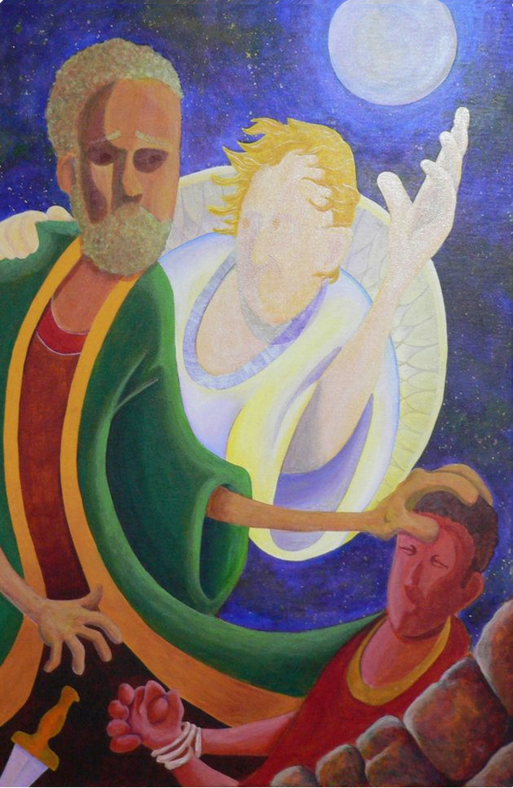 Abraham & Isaac, Acrylic on canvas, 24" x 36", 2009 ~SOLD~
This painting depicts the events of Genesis 22 in which God tests Abraham's faith by asking him to sacrifice his one and only son. Abraham demonstrates faith of epic proportions by getting up the very next day to obediently carry out the task God had laid before him.

I struggled with this composition for some time, going through multiple variations of the arrangement of the three figures. There were also a number of elements from the story that I wanted to be sure and include, the hardest of which, was the ram that God ultimately provides for the sacrifice. And to me, that is a key point in the story when Abraham tells Isaac in Genesis 22:8 that "My son, God will provide himself a lamb for a burnt offering ". Abraham didn't know how, but he trusted that God would provide, and on the basis of that trust, he followed through with his unfortunate instructions.

I wanted this belief that God will always provide a way to be the theme or underlying current of the work, and the ram was the obvious symbol of that message. But I just couldn't seem to fit the ram in without the composition getting too crowded. That's when I happened along the idea of letting the beautiful spiral of the ram's horn direct the rhythm of the composition, and lead the eye along the three main figures. The tip of the spiral ends directly in the center of the canvas to allude to the theme of God providing being the central message in the story. The angel's wing help form the spiral as he sweeps in from the left to stop the sacrifice. The angel also gestures to the moon which symbolically suggests God's omnipresence as he watches these events unfold.