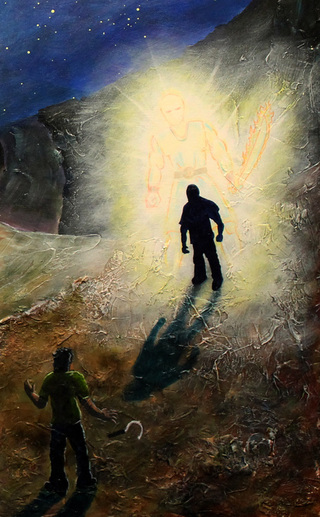 Psalms 34:7
The angel of the Lord encampeth round about them that fear him, and delivereth them.

Isaiah 63:9
In all their affliction he was afflicted, and the angel of his presence saved them: in his love and in his pity he redeemed them;

Daniel 10:5-6
Then I lifted up mine eyes, and looked, and behold a certain man clothed in linen, whose loins were girded with fine gold of Uphaz: His body also was like the beryl, and his face as the appearance of lightning, and his eyes as lamps of fire, and his arms and his feet like in colour to polished brass, and the voice of his words like the voice of a multitude.

Numbers 22:23
And the ass saw the angel of the Lord standing in the way, and his sword drawn in his hand...

Matthew 28:2-3
And, behold, there was a great earthquake: for the angel of the Lord descended from heaven, and came and rolled back the stone from the door, and sat upon it. 3 His countenance was like lightning, and his raiment white as snow:

2 Kings 19:35
And it came to pass that night, that the angel of the Lord went out, and smote in the camp of the Assyrians an hundred fourscore and five thousand: and when they arose early in the morning, behold, they were all dead corpses.

Genesis 3:24
So he drove out the man; and he placed at the east of the garden of Eden Cherubims, and a flaming sword which turned every way, to keep the way of the tree of life.

Judges 13:6
Then the woman came and told her husband, saying, A man of God came unto me, and his countenance was like the countenance of an angel of God, very terrible...

1 Chronicles 21:6
And David lifted up his eyes, and saw the angel of the Lord stand between the earth and the heaven, having a drawn sword in his hand...

Psalms 103:20
Bless the Lord, ye his angels, that excel in strength, that do his commandments, hearkening unto the voice of his word

Matthew 26:53
Thinkest thou that I cannot now pray to my Father, and he shall presently give me more than twelve legions of angels?