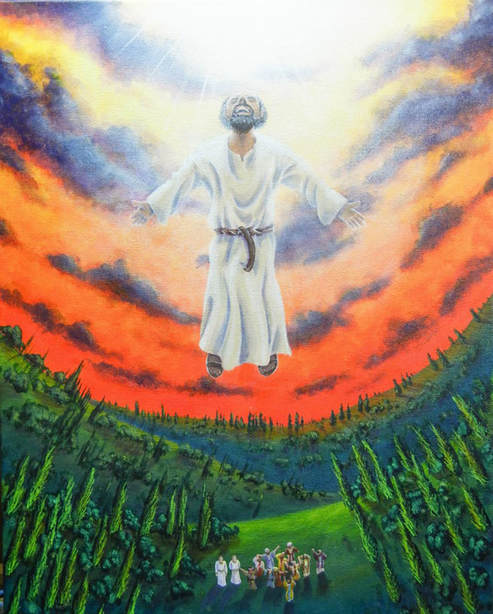 "The Ascension (Acts 1:1-11)", Acrylic on Canvas, 2014
Acts 1:8-11 (KJV)
"8 But ye shall receive power, after that the Holy Ghost is come upon you: and ye shall be witnesses unto me both in Jerusalem, and in all Judaea, and in Samaria, and unto the uttermost part of the earth.  9 And when he had spoken these things, while they beheld, he was taken up; and a cloud received him out of their sight.  10 And while they looked stedfastly toward heaven as he went up, behold, two men stood by them in white apparel; 11 Which also said, Ye men of Galilee, why stand ye gazing up into heaven? this same Jesus, which is taken up from you into heaven, shall so come in like manner as ye have seen him go into heaven.”

This painting was intended to be a fairly straightforward interpretation of the historical account of Yeshua ascending into Heaven at the conclusion of his Earthly ministry.  I've intentionally tilted Yeshua’s head back quite far to, in part, avoid the issue of what He looked like, since the Bible itself is noticeably silent on the issue. (I do know this for certain; he was not a long haired Caucasian man as he is frequently portrayed. Here's a brief article that explores this issue a little more) However, I also tilted his back because it seems the most natural posture for one being welcomed into the Kingdom of Heaven. As the sky opened up to receive him, it would only make sense that Jesus would fix his gaze squarely on the eyes of our Heavenly Father who was anxiously bringing his son home. I eagerly await the day when, I too, will finally get to see my Savior face to face!

Yellow and violet are often used to denote royalty, which is why I chose to incorporate violet clouds atop the yellow and orange sky.  It becomes a regal backdrop upon which to feature the Prince of Peace and the King of Kings as he ascends to take his throne in the Kingdom of Heaven.

Below Yeshua are the eleven apostles who were left behind to start the work of the Great Commission and lay the foundation for the church.  Next to them are the angels referenced in verse 10 and 11.

For me, this painting celebrates the fact that Yeshua was a literal, historical figure who lived a perfect life on this Earth performing countless miracles as documented in the book of history known as the Bible.  That he was crucified and died, bodily rose from the dead, was seen alive by hundreds of people for over a month, and then ascended into Heaven in front of witnesses.  These are true events and I did not want to fanaticize them in any way.  This is what our Savior did.