The summer of 2006 I was blessed with the opportunity to participate in a fundraiser for the Mulvane Museum of Art in which local artists were invited to create artworks from donated tables. The invitation to participate arrived while I was in the process of working on my Trinity painting. I decided I would just treat the table as the next painting in the Joyflow series to allow me to continue down this new path.  It was also terribly exciting because this would be the most visibility any of my work had ever received. I knew almost immediately "Communion" would be my theme. It just seemed obvious, since I was planning on painting Christian themes on a table. Initially I was envisioning finding a nicely aged and rustic table and simply treating the top like a canvas. However, when I arrived at the storeroom with the donated tables and saw this rectangular block, I knew that was my table. So now, instead of having one "canvas" to paint, I had five! It took about a week to complete all the preliminary drawing on the five sides, and they for the most part looked much like the Trinity canvas. On the night I had planned to begin painting, I felt an undeniable conviction. If I was going to really take advantage of this opportunity, the drawing had to be redone. If that many people were going to see it, and if I was really serious about wanting to "talk" about God in these paintings, I had to be more obvious. Painting the table became a fascinating act of faith in itself. Since it was a fundraiser, the table would be auctioned off and I, of course, would see none of the proceeds. And I was pouring so much of myself into the paintings, that I was becoming really attached to the work. But soon someone would come and buy it and I had no way of knowing if I would ever see it again. I simply had to trust that God had a plan for this table and that my part of that plan was to simply paint it and give it up. So that's what I did. The sides were actually designed to be sequential. So if it's of interest to anyone the order is as follows: Creation, Sin, Redemption, Resurrection, Communion. 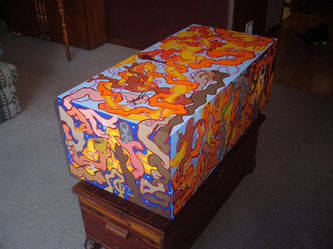 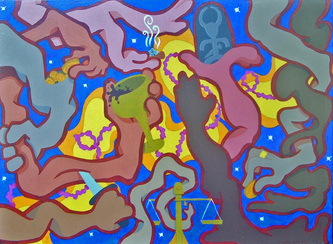 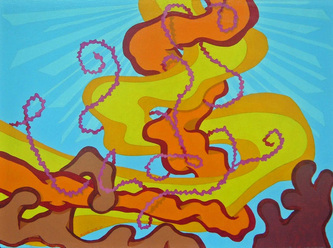 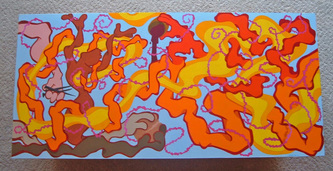 Want to see more Special Projects?  You can use the links below to navigate through the gallery.
<< Post-It Note Mural : Topeka Bible Church