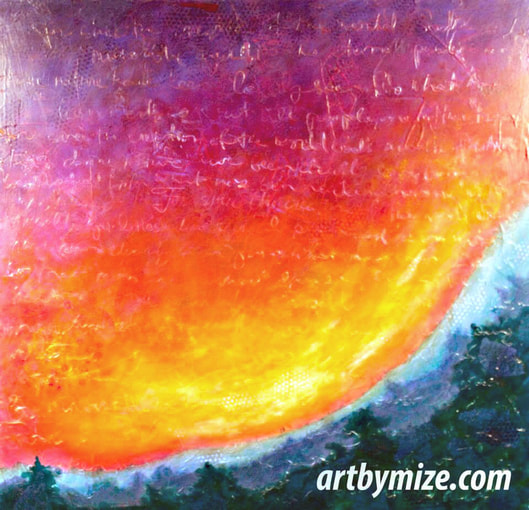 Divine Nature (Romans 1:20), Acrylic Mixed Media on Masonite, 28" x 28", 2012
This painting was originally created for the final ReThink Topeka Artwalk and Exhibit.  The show had a requirement of all the artwork having a Kansas theme.  I decided to work with an abstracted sunset landscape inspired by one of my personal favorite regions of Kansas, The Flint Hills.  Immediately I thought about Romans 1:20 and the idea that God has clearly revealed himself through what he has made.  If we desire "proof" for God, we need look no further than the abundant evidence he has placed in the natural world around us.  Because this was going to be a well attended art event, I wanted this idea deeply embedded within the context of the painting so that the artwork could act as a witness.  This was what lead to the idea of not just having the painting be inspired by the word of God, but to have the image actually "contain" the word of God.  Thus, the text of Romans 1:20 is repeatedly inscribed in a layer of modeling paste that I applied to the panel before beginning to paint.

"For since the creation of the world God’s invisible qualities—his eternal power and divine nature—have been clearly seen, being understood from what has been made, so that people are without excuse."  - Romans 1:20 (NIV)

The text is not necessarily legible, but does provide a great deal of texture and visual interest.  I find people leaning in to take a closer look, trying to analyze the writing.  The hope is that when they discover the verse in the title, they might go and seek out this verse themselves.   Whether the verse is legible or not, I am convinced that it adds an undeniable spiritual element to the work as we are assured in Hebrews 4:12 that, "the word of God is quick, and powerful."  There is power in the very words of God and it is my hope that the Holy Spirit would work through them even when applied in such a conceptual was as this.