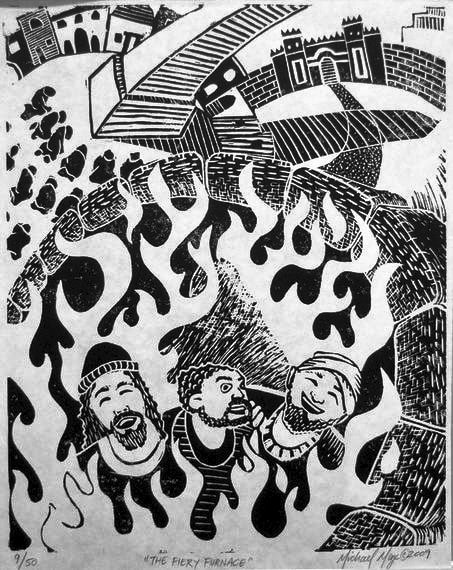 The Fiery Furnace, linoleum block print, 8" x 10", 2009
This painting is based on the Old Testament story of Shadrach, Meshach and Abednego from the third chapter of the book of Daniel.  In the background of the composition is the Ishtar Gate, the main entrance into Babylon.  A large gold obelisk, which is the  golden image set up by King Nebuchadnezzar in verse 1, casts a shadow across the landscape as timid townsfolk bow before it in worship.  The three heroes of faith take center stage amidst the flames of the furnace which had been heated seven times hotter than normal, (verse 19) while a fourth figure, Jesus, can be seen faintly behind the trio. (verse 25)

I debated for a long time about what to do with the faces of the three main characters and finally opted for the various expressions of joy and laughter. My main motivation for this decision is based on my own speculation of what these men must have been feeling. They were prepared to face an agonizing death by being cast into the furnace. The heat alone killed the soldiers who ushered the men into the blaze. (verse 22) I imagined their eyes clenched tight in expectation, only to be slowly opened as the gradual realization washed over them;  they were unharmed.  Laughter seems to be the only likely response.  I also really enjoy the juxtaposition of their expressions against what initially appears to be an alarmingly violent image of three men being burned alive. The smiles and laughter are so contrary to what one would expect that they, hopefully, provoke curiosity.

The bricks of the furnace split the canvas into essentially two separate color schemes. The cool colors in the upper half are symbolic of the faithless masses who bow to the idol as commanded. Spiritually, the world is cold and dead. The entire bottom half of the canvas scorches with the warm colors of the furnace. These colors are not only literal, but also represent the strength and courage demonstrated by the three men. Spiritually, these men are on fire with faith. And God rewards them appropriately by delivering them from the flames without even the smell of smoke on their clothes. (verse 27)
This 8" x 10" hand pulled linoleum block print comes frame ready in a 10" x 13" mat
Also available as framed print behind glass in a 10" x 13" natural poplar wood frame