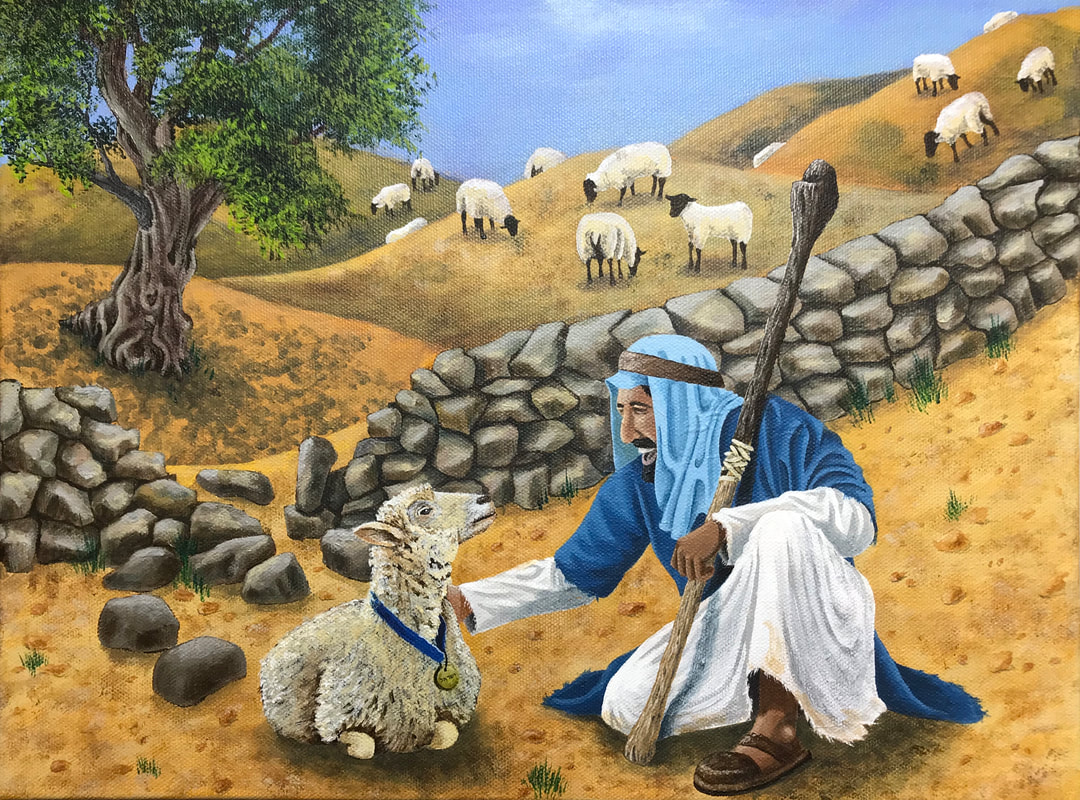 "House of Israel" Acrylic on Canvas, 12" x 16", 2020
​On the surface, this painting seems like a very common depiction, dare I say even cliché, of the standard Biblical lost sheep scenario. This is actually on purpose. I wanted to create something very familiar, and approachable, and comforting. I wanted to paint something that could become a conversation starter and a possible catalyst to share some deeper truths that are carefully hidden within the work.

Even casual students of the Bible are readily familiar with the number of parables and prophecies speaking of the Good Shepherd and His dedicated attention to every one of the sheep in His flock. Most of us easily identify with that lost sheep who mindlessly wandered off and needed saving. We understand the peace and comfort that only comes from having been found by our shepherd and reunited with the flock. And therein lies a critically important point that I had missed for nearly a decade. Who is the flock? And who am I amongst them?

Perhaps the most important point I hope to convey in this painting is the identity of this sheep to whom we all so easily relate. Ironically enough, this most important concept is found in the tiniest of details. The gold tag hanging around the sheep's neck bears the Hebrew letters which spell "Israel." Thus the good shepherd is finding the lost sheep Israel.

[Matthew 15:24 NKJV] But He answered and said, "I was not sent except to the lost sheep of the house of Israel."

If I am to take advantage of the Messiah's free gift of salvation being offered by grace through faith, I must understand the context in which that offer is being made. That context is Israel. He ONLY came for the lost sheep of the house of Israel. And if I want to be a part of the covenant relationship He's offering, I must be a part of Israel. I must become Israel.

This is no different from what we read about in the Exodus from Egypt. Yahweh sent the Christ like figure of Moses into Egypt specifically to rescue His chosen people Israel. However, what marched out of Egypt was a mixed multitude. And when they arrived at Mt. Sinai, they received one law for the native born and the sojourner. (see Exodus 12:49) Even though Moses only came for Israel, people of other nations were allowed to come along and be a part of God's chosen people, provided they were willing to abided by the terms of the covenant. Thus, they became Israel.

As someone who believes that he has been saved by the substitutionary death of the lamb of God, I now recognize that my spiritual identity is a member of the commonwealth of Israel. Again, this follows the pattern of the Exodus in which ANYONE who applied the blood of the lamb to their doorpost was saved, but that provision was given specifically for Israel.

Thus, as a member of Israel, it is my great honor and privilege to demonstrate my love and gratitude to my Savior by following His example to be as obedient as I can to all that He commanded His people at Mount Sinai. I do this because I was once lost, but now I'm found. I do this because I’ve come to realize that I am Israel.

And since I have now been found, I must rejoin the flock that has always remained with the Father and obedient to His instructions. That flock is Judah. (See Genesis 49:10) We will one day be reunited as one harmonious body under the direction and guidance of our shepherd, the Messiah. Ezekiel 37:15-28 declares this in the prophecy of the two sticks, which is why I’ve painted the shepherd with a staff of two distinct colors of wood that have been bound together. This is a fascinating passage to read in its entirety, but perhaps one of the more important key verses for this discussion is Ezekiel 37:24, "David My servant shall be king over them, and they shall all have one shepherd; they shall also walk in My judgments and observe My statutes, and do them.”

In order to return to the flock, this lost sheep must get past the barrier of an ancient stone fence. Thankfully, the good shepherd has already made a way by breaking down a portion of this wall to allow passage through. This wall depicts the cultural tradition of Judah intentionally separating and segregating themselves from the gentiles. This tradition even lead to a literal, physical wall that isolated gentile converts to a specific portion of the temple courtyard. In Ephesians 2:11-16, Paul address the spiritual significance of how Yeshua’s willingness to give His life on our behalf tears down that wall that was erected by the traditions of the Pharisees.

Ephesians 2:11-16 (NKJV) 11 Therefore remember that you, once Gentiles in the flesh--who are called Uncircumcision by what is called the Circumcision made in the flesh by hands-- 12 that at that time you were without Christ, being aliens from the commonwealth of Israel and strangers from the covenants of promise, having no hope and without God in the world. 13 But now in Christ Jesus you who once were far off have been brought near by the blood of Christ. 14 For He Himself is our peace, who has made both one, and has broken down the middle wall of separation, 15 having abolished in His flesh the enmity, [that is,] the law of commandments [contained] in ordinances, so as to create in Himself one new man [from] the two, [thus] making peace, 16 and that He might reconcile them both to God in one body through the cross, thereby putting to death the enmity.

After passing through the wall, we encounter a large olive tree. The Bible frequently uses the olive tree as a powerful spiritual metaphor. The healthy tree yields fruit, or olives, which are then pressed to make oil. That oil is used for many purposes, one of which is producing light in a lamp. Think here about the parable of the wise and foolish virgins. The foolish virgins, who are not prepared for the return of the bridegroom, did not have oil for their lamps and were thus not allowed to accompany the groom.

But perhaps the most iconic use of olive tree imagery in the Bible is found in Romans 11:16-25 when Paul compares a wild olive tree and a cultivated olive tree to explain the process of believers being grafted in to the commonwealth of Israel. When we are saved by grace through faith we are adopted into the family of God and become siblings with the children of Israel. As such, we are fellow heirs to both the blessings and the curses connected to the covenant the Most High made with his people. This is an issue of fundamental importance for all believers to understand. Romans 11 is a key passage in explaining the significance of the role gentiles play in our Heavenly Father's plan, as well as our place in his family. Thus, on the left side of the tree I have painted a branch that is distinctly different and appears to have been grafted onto the tree

Together, all these details create a portrait of who we are in Messiah.  I intentionally crafted this composition in such a way that it would be my hope that anyone who owned a copy of it could use it for the purposes of explaining this concept to others. This work could become a visual aid for sharing the truth of our spiritual identity under Messiah as being a part of the House of Israel. I find it endlessly exciting imagining my art being the catalyst to help share this life changing and faith affirming truth.
​
The original acrylic painting has sold.
​ I’m also offering high resolution fine art giclée reproduction prints in two different sizes:
A full size 12” x 16” print is available for $95.
A 9” x 12” print is available for $70.
Anyone interested use to the contact page for more details or to make arrangements.