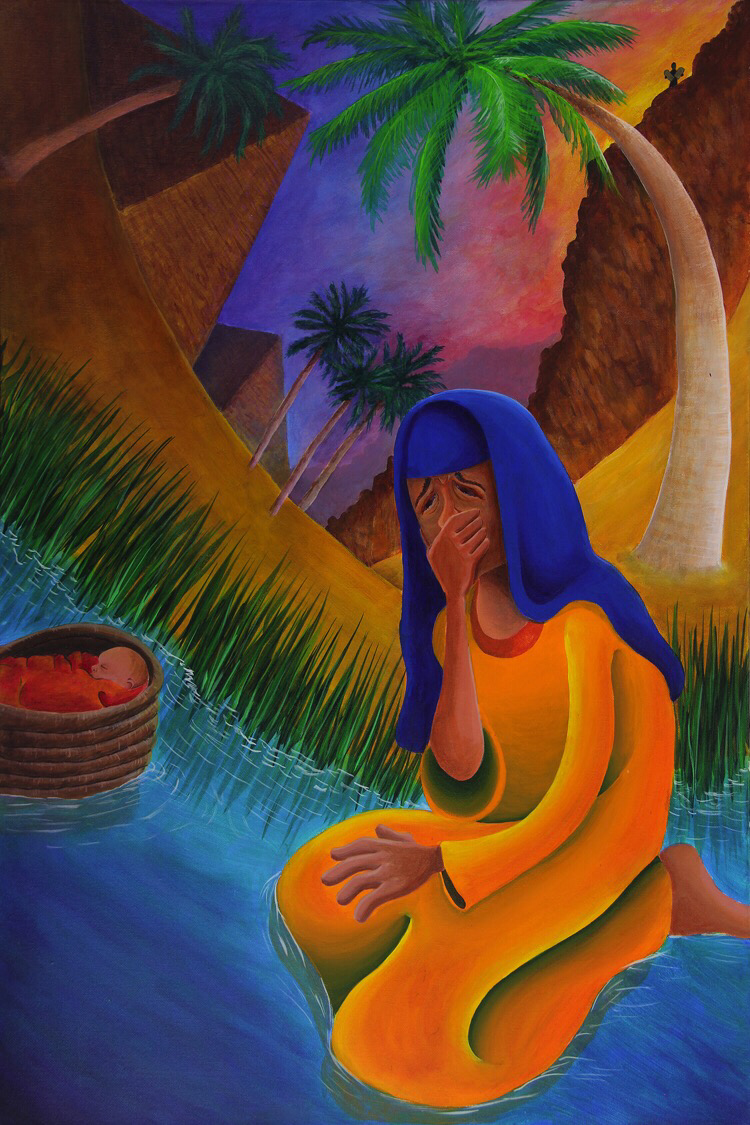 The focus of this painting is the unwavering faith of Jochebed (yo-KHEH-vehd), the mother of Moses. This Old Testament story, found in the second chapter of Exodus, is a well known account that often overlooks the valiant trust this Levite woman placed in the Lord. Jochebed was a Hebrew slave living in Egypt. Out of fear the Hebrew population might grow to an uncontrollable size, the Pharaoh issued a decree that, “Every son who is born ye shall cast into the river.” (Exo. 1:22) After hiding her newborn son for three months, Jochebed decided that rather than keeping her child and risking him being found and killed, she would entrust him to the Lord. She placed the infant into a papyrus basket and placed him into the Nile river. The child was discovered by none other than the Pharaoh’s daughter who had compassion on the crying baby. With some help from Moses’ quick-thinking sister Miriam, the infant was returned to Jochebed, who was commissioned by Pharaoh’s daughter to act as the baby’s caretaker and raise the young child.

To me, the most striking aspect of this story is the fact that Jochebed did not receive instructions to place the infant Moses in the basket. I would imagine that if she had received divine intervention of some kind, it would have been a slightly easier task to endure. However, Jochebed had such a solid faith in God that she knew if she gave the child up, the Lord would take care of him. I suspect though, there must have been lingering doubts the moment after releasing the basket that must have been near crippling to this woman’s faith. This is the moment depicted in the painting. It would have been all too easy to quickly retrieve her baby and try on her own to keep the child alive. Yet she fought through those doubts and trusted God. This faith was immediately rewarded by the Lord. She not only had her child returned to her the very same day, but was free to raise him in public, without fear, and she was even paid to do so! While in this moment she doesn’t know it yet, her son will go on to become one of the greatest heroes of the Christian faith. This fact is foreshadowed with the silhouette of the adult Moses holding the ten commandments on the mountain in the background.
Affordable Fine Art Glicée Reproduction Prints of this painting are available.
Fine Art Magnets of this painting are available