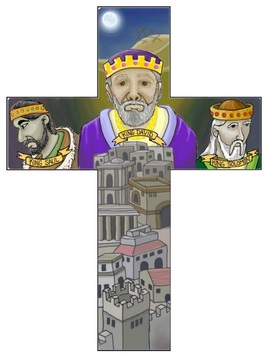 This composition was greatly inspired by the vision of Joe Hishmeh, head pastor of Fellowship Bible Church.  The first three kings of Israel are depicted here above the city of Jerusalem, which was drawn from a reference image.  The greatest of the kings, David, is centered and drawn directly above the city that often bears his name. (Jerusalem = City of David)  Saul, who was largely a selfish and wicked king has turned away entirely and is largely in the dark.  Solomon, the son of David, started out righteous and then also gradually turned away from God.  A simple landscape in the background above David depicts the three crosses on Calvary.  This foreshadowing is an illustration of the fact that Yeshua came from the line of David.

*Music "Faithful One" used with permission by Bill Horn.
Want to see more of  The Cross Videos?  You can use the links below to navigate through the gallery.