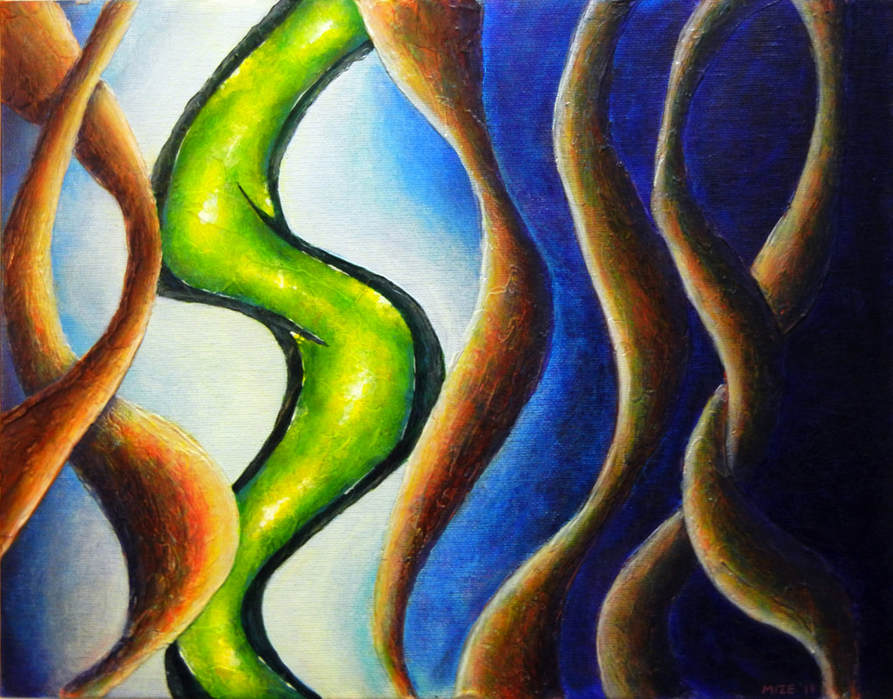 Light Into the World (John 12:46), 11" x 14" , Acrylic, Colored pencils, Modeling Paste on Masonite. ~SOLD~
The inspiration for this painting actually came during a sermon at church.  I quickly scribbled some ideas down on the back of the sermon notes and sketched out a quick thumbnail.  In the initial conception of the idea the green line, which always represents Yeshua, was actually going to be a light blue line.  I had intended this line to be suggestive of a human, with the idea being that we are the light of the world as mentioned by Yeshua in Matthew 5:14-16.  It would show a glowing line casting light on to others in an environment that was predominantly overwhelmed by darkness.  As much as I still like this imagery with that verse, something didn’t feel right about the painting as I was nearing completion of it.

Then I stumbled upon the verse in John as part of our daily reading journal that we, as a congregation, are collectively working through at Fellowship Bible Church.  “ I am come a light into the world, that whosoever believeth on me should not abide in darkness ” (John 12:46)  I was amazed at how perfectly that verse seemed to describe the imagery I was developing.  And I realized if I made the blue human line into a green Yeshua line, everything made sense.  The other lines are drawn towards His light as they find their way  back to Him and out of the crippling darkness.  As they draw closer to Him, they are bathed in His light and His love.  The same is true for us, the closer we get to Yeshua, the more effective we become at reflecting the light of His truth and love.  And then, just as the original verse from Matthew suggests, “Let your light so shine before men, that they may see your good works, and glorify your Father which is in heaven.”
Affordable Fine Art Glicée Reproduction Prints of this painting are available.
Fine Art Magnets of the painting are available