"Love of the Father" 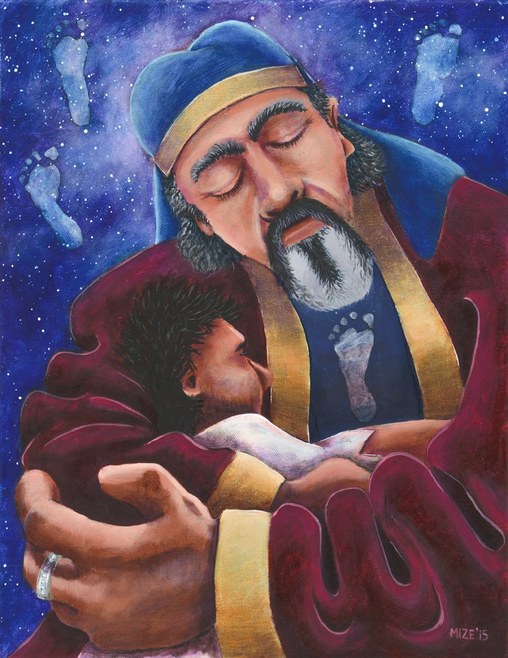 "Love of the Father", Acrylic on Canvas, 14" x 18", 2015
“I will arise and go to my father, and will say unto him, Father, I have sinned against heaven, and before thee, And am no more worthy to be called thy son: make me as one of thy hired servants. And he arose, and came to his father. But when he was yet a great way off, his father saw him, and had compassion, and ran, and fell on his neck, and kissed him.” - Luke 15:18-20

I recently had the privilege of being commissioned to create a painting as a Father’s Day present for a brother in Christ who has, along with his wife, endured unimaginable hardships in their short seven years of marriage. In addition to their beautiful and energetic young daughter, this couple also has three children already in Heaven with the Lord. Losing a child can be, perhaps, the most difficult obstacle for a marriage to overcome. To have that burden tripled is a level of grief I am completely incapable of comprehending. And yet in spite of that pain, this couple has not only endured together, but they have kept their eyes fixed squarely on the Lord. They have fought their way past the unanswerable question of “why” and simply allowed God to continue to lead them through their unique story. They are a living testament of faith in action. They are a textbook example of what it means to draw your strength from Yeshua Messiah.

I was immediately excited when I was contacted about creating a painting for the husband as a surprise gift for him. After knocking around a few ideas, my wife actually suggested the parable of the prodigal son found in Luke 15. This teaching story told by Yeshua paints such a beautiful picture of the unrelenting love shown to us by God the Father. Despite our constant failures and shortcomings, he always eagerly runs to meet us and embrace us in his strong and forgiving arms.

I wanted the painting to evoke that unique feeling of safety found only in the arms of a father, and so I exaggerated their size, allowing the arms to overwhelm the figure of the son. I enjoyed as well that these enormous arms create an image that is suggestive of cradling an infant. No matter how old your child gets, every parent is well familiar with the feeling of always seeing them as your little baby. I also wanted to embellish the father’s robe and ring as details mentioned in the gospel account. The lost son receives the father’s best robe, a ring, and shoes as gifts from his father.

In addition to adding details from the scriptural text, I wanted to add a few details to personalize the painting for the husband who was receiving the painting as a gift. For example, a photograph of his actual wedding band was used to paint the ring in the painting. Most importantly though, are the footprints. There is one footprint on the chest of the father to represent their daughter that they currently have with them. And three footprints in the starry sky to symbolize their children that are already at home in Heaven. The images of the footprints are the actual prints taken from one of their children who was only here on earth for a precious few days.

This painting was an absolute joy and honor to create. It flowed out of me almost effortlessly, that is to say, I encountered no complications while working on it. (The artists out there can attest to the fact that those kinds of work are often few and far between.) I am left with a very satisfying feeling of having been privileged to play a small part in the story of their family. I was blessed by being able to make this painting for them, and I pray that it will be a blessing to them for years to come. I thank God for this opportunity, and for this family.