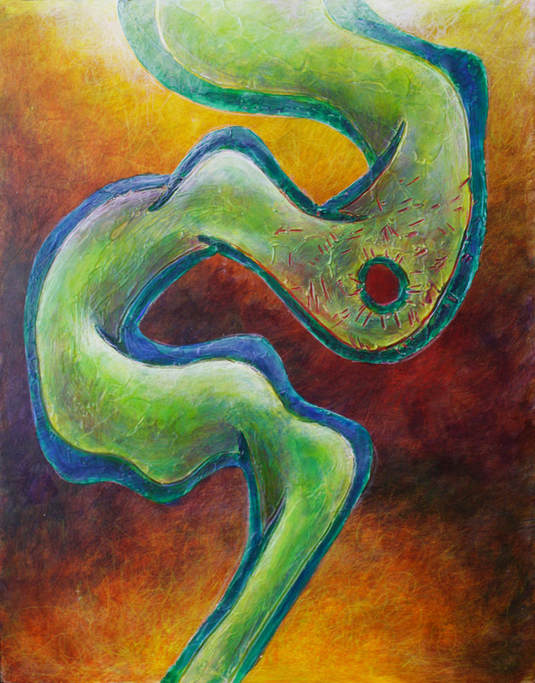 Messiah (Isaiah 53), 11" x 14" , Mixed Media on Masonite ~SOLD~
This is the third in a subseries of  "portraits" of the various lines that appear in my Joyflow paintings.  These images, which each feature a single line, are intended to act as a sort of legend for the Jowflow paintings; showcasing some of the attributes that have been personified into the symbolic lines.

The green line always represents Yeshua.  The color green to me often alludes to growth.  And with the apparent connections to plant life, green is also a very earthy color.  This seemed like an obvious choice for the color of the Yeshua line since he physically came down to earth and provided the only way for all of us to discover true spiritual growth.

Isaiah 53 is a fascinating passage as it was written nearly 700 years before Yeshua came to earth.  And yet it conveys a very clear description of His life and sacrifice.  There are a number of key verses within this passage that inspired the composition of the painting.  The line begins quite narrow and thin in reference to verse 2, “For he shall grow up before him as a tender plant, and as a root out of a dry ground.”  The background is lit up behind this bottom portion of the line to symbolize the light of God coming in the dark and sinful nature of the world.

I did not want this to be a flattering portrait of Yeshua, because his life here on earth was not one of luxury and extravagance, it was instead a life marked by grief, suffering, and pain. (v 2-4)  He had every right to come in the full extent of His glory as God, however, he humbled himself, taking the form of a man and enduring the same range of emotions that we all experience.   In addition, he spent the majority of his ministry years being shunned and rejected by the very population of people who should have been able to immediately recognize and acknowledge him as the promised Messiah.

Perhaps one of the most powerful passages in the chapter is verse 5, “But he was wounded for our transgressions, he was bruised for our iniquities: the chastisement of our peace was upon him; and with his stripes we are healed.”  This verse is depicted in the hole that punctures the line and the red scratches meant to represent the scourging Yeshua received prior to His crucifixion.  The line, however, recovers from these visual afflictions and proceeds to rise to the top of the painting and into the bright light of heaven.