The Prodigal Son is one of the most well known parables taught by Yeshua.  This is a story that deeply resonates with many believers because it so closely resembles our own path to salvation.  My goal was to create a painting that not only was a visual retelling of the entire teaching, but that also captures the intensely emotional moment when the Father once again embraces his lost son and welcomes him back home.

That reunion is obviously the climatic moment of this parable and so I placed it front and center.  The father’s arms are exaggerated and enlarged to convey the strength of his embrace that completely envelopes his son.  In that moment, as they clutch one another, I imagine they are both transported back to a time when things were simpler.  A father lovingly hugging his boy and an adult child once again feeling like a young man safe in his father’s arms.  (To help better depict this, my own sixteen year old son modeled for the son in the painting.)

As the father clings to his son whom he thought had died, everything that had happened before was instantly forgotten and forgiven. The impact of this grace is overwhelming for the son as he recognizes it was his own choices that caused all of the grief. He chose to ask his father for his inheritance.  He chose to abandon his family.  He chose to squander his wealth on debauchery.  And it was his choices that ultimately landed him amongst the pigs.  And from a true Biblical perspective, that’s an incredibly unclean place to find yourself.  But it was also his choice to repent from what he had done and return to his father in humility.

We all are faced with the same reality that our choices often dictate where we end up.  Just before entering the promised land, Moses outlined for the people, as well as for us, the great benefits of obeying our Heavenly Father, and the dire consequences for disobeying him.  And then he declared to them,

"I call heaven and earth to witness against you today, that I have set before you life and death, blessing and curse. Therefore choose life, that you and your offspring may live, loving the LORD your God, obeying his voice and holding fast to him, for he is your life and length of days, that you may dwell in the land that the LORD swore to your fathers, to Abraham, to Isaac, and to Jacob, to give them.” - Deuteronomy 30:19-20 ESV

I’ve tried to visually depict this choice within the painting.  The left side features the Father’s house and is teeming with light and life.  The right side, with the pig farm from which the son is retreating, is dark, barren, and unclean.  The decision is ours on where we will go.  But the truly incredible fact, and the reason that a great many of us identify so profoundly with this parable, is that even if we’ve made some terrible decisions, we can always choose to come back home to our Father. Always.

And as mentioned before, this idea of reunification truly is the central theme of this parable.  But perhaps even more fascinating is that even through we connect with this teaching in such a personal and intimate way, it’s not actually about us.  Ultimately, this parable is about the future reunion of the Father’s chosen people, The Kingdoms of Judah and Israel

After the reign of King Solomon the nation of Israel was divided into two kingdoms.  The southern kingdom was comprised of the tribes of Benjamin and Judah and is often referred to in scripture as the House of Judah.  While the House of Judah did go into exile for 70 years for their disobedience, the Father eventually returned them to the promised land where they rebuilt the wall and the temple.  To one extent or another, their historical lineage has persevered even to this day.  In fact, the term “Jew” is derived from Judah.  Thus, in the context of the prodigal son parable, the House of Judah is the jealous brother who stayed home with the Father.

The northern kingdom was made up of the remaining ten tribes and is frequently identified in scripture as the House of Israel.  The House of Israel also went into captivity for their disobedience and spiritual adultery.  However, unlike Judah, Israel never returned to the land.  In fact, the Father wrote them a certificate of divorce and they were scattered and eventually assimilated into all the nations on earth.  In the context of the prodigal son parable, the House of Israel is the younger brother who abandoned his Father and squandered his inheritance on reckless living.  I allude to the House of Israel’s spiritual infidelity and the fact that they were scattered into all the nations by depicting the far country as a collection of buildings from various other world religions.

Despite this division, there are a great many passages throughout the Old Testament that speak of the future reunification of these two kingdoms. The entire chapter of Jeremiah 3 is a particularly interesting example of this. However, when it comes to scripture that foretells of the reuniting of the two divided houses of Israel and Judah, there are perhaps no passages more clear than Ezekiel 37:15-28 and the prophecy of the two sticks.  The Father instructs Ezekiel to label two sticks, one for Judah and one for Joseph, thus representing the two divided kingdoms.  Ezekiel joins these two sticks together in his hand to symbolize the future reunification of the two houses.

Ezekiel 37:19-22 ESV - “…Thus says the Lord GOD: Behold, I am about to take the stick of Joseph (that is in the hand of Ephraim) and the tribes of Israel associated with him. And I will join with it the stick of Judah, and make them one stick, that they may be one in my hand.  When the sticks on which you write are in your hand before their eyes, then say to them, Thus says the Lord GOD: Behold, I will take the people of Israel from the nations among which they have gone, and will gather them from all around, and bring them to their own land. And I will make them one nation in the land, on the mountains of Israel. And one king shall be king over them all, and they shall be no longer two nations, and no longer divided into two kingdoms."

In the painting, the Father is shown holding these two sticks joined together as one in his hand as a direct reference to this passage.  But even more incredible, the last six verses of Ezekiel 37 speak of the coming eternal reign of the Messiah as King under the new covenant, as well as the Father establishing His dwelling place here on Earth.  In other words, this reunification of the divided kingdoms of Judah and Israel happen under the authority and leadership of the Messiah.

Ezekiel 37:23-27 ESV - "They shall not defile themselves anymore with their idols and their detestable things, or with any of their transgressions. But I will save them from all the backslidings in which they have sinned, and will cleanse them; and they shall be my people, and I will be their God. "My servant David shall be king over them, and they shall all have one shepherd. They shall walk in my rules and be careful to obey my statutes. They shall dwell in the land that I gave to my servant Jacob, where your fathers lived. They and their children and their children's children shall dwell there forever, and David my servant shall be their prince forever. I will make a covenant of peace with them. It shall be an everlasting covenant with them. And I will set them in their land and multiply them, and will set my sanctuary in their midst forevermore. My dwelling place shall be with them, and I will be their God, and they shall be my people.”

It is also worth noting that in this future prophecy of the renewed Heaven and Earth, the Father specifically notes that “the people shall walk in my rules and be careful to obey my statutes.” It’s an unfortunate fact that much of mainstream Christianity teaches that Jesus came to do away with the law.  Yet here, and in many other prophetic passages, we have scripture stating that believers will be obeying God’s law in the future.

As mentioned from the outset, the Parable of the Prodigal Son is often a powerful metaphor for many believers and their personal journey to faith.  And in the same way that the two houses will be reunited with the Father through Yeshua the Messiah, we too only have access to the Father’s house through our Savior.  This is why in the painting the gate to the Father’s house bears the name of Yeshua in Hebrew.

Just inside the wall of the Father’s House is an olive tree with one branch of a slightly different color that appears to be grafted into the tree. In Romans 11:16-25, Paul compares a wild olive tree and a cultivated olive tree to explain the process of believers being grafted in to the commonwealth of Israel. When we are saved by grace through faith we are adopted into the family of God and become siblings with the children of Israel. As such, we are fellow heirs to both the blessings and the curses connected to the covenant the Most High made with his people. This is an issue of fundamental importance for all believers to understand. Romans 11 is a key passage in explaining the significance of the role gentiles play in our Heavenly Father's plan, as well as our place as adopted children in His the reunified family of His chosen people.

There is so much more to dig in and study on this parable and it’s deeper meaning.  For anyone interested, here is an in depth article that might provide some more insight and further investigation and study.

The original acrylic painting is available for purchase at $4,000
​
High Resolution Fine Art Prints
are available in four different sizes
​Prices do not include Shipping/Handling 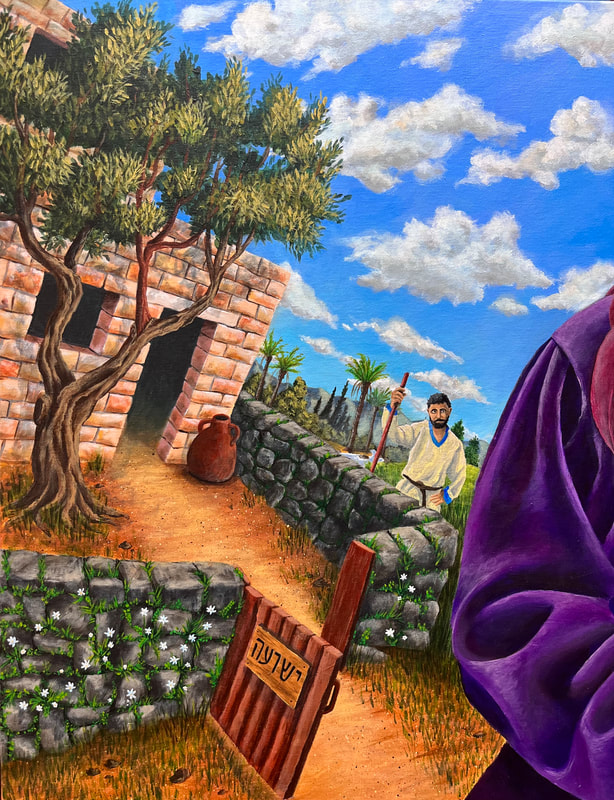 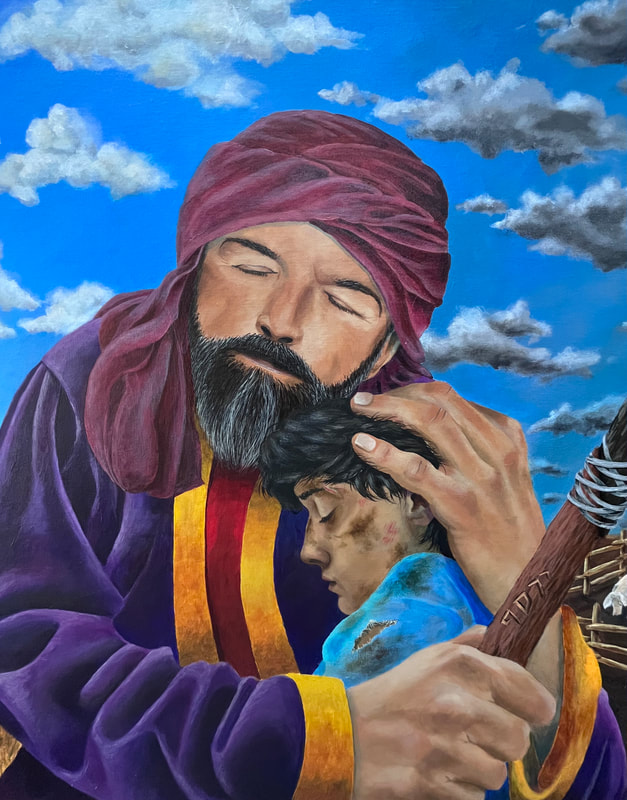