I received an email from Brett Durbin, director of Trash Mountain Project, asking if I might be interested in helping them create a stop motion video for a benefit they were planning.  I had no experience with any kind of animation, but it sounded like a lot a lot of fun and I was willing to give it a try to help out.  The idea was to create a video that showed a hand drawing a series of images that illustrate the story of the Parable of the Mustard Seed from Matthew 13:31-32.  This parable was the planned theme of the evening and the animation was intended to draw a comparison between the mustard seed story and the explosive growth Trash Mountain Project has experienced in the two and half years since it began.

I had one week to prepare myself and spent those evenings filling my sketchbook with drawings of crows, hands, and trees.  The practice was important, because in order for the animation to work properly, the drawings had to be completed as quickly as possible.  To shoot the video we stretched a large roll of butcher paper across a table.  Two six foot ladders were placed on either side of the table, and a pane of glass was placed on top of a pair of two by fours that were stretched between the ladders.  A digital camera was placed on the glass so that it could shoot from directly above my hand as I was drawing.  As I worked on the drawing, Jon Demeo of TMP, clicked pictures as quickly as possible.  Periodically we had Brett pull the roll of paper to create the scrolling effect as the drawing progressed.

We shot the whole sequence twice, the first time taking about 1600 pictures in the span of 25 minutes.  We paused numerous times during the drawing to discuss ideas and make suggestions.  The second time only took about15 minutes to complete and we shot around 1100 photos.  These images were then uploaded into a video editing software to create the actual animation.  All in all it was a excellent experience and a great deal of fun.  I hope very much to be able to work with the guys at TMP again on future projects. 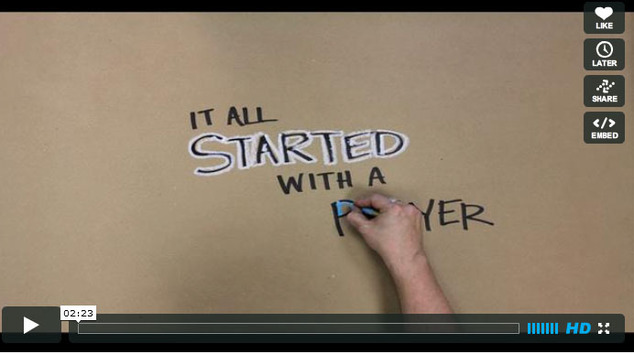 Click the picture to watch the two minute animation on Vimeo.
Want to see more Special Projects?  You can use the links below to navigate through the gallery.