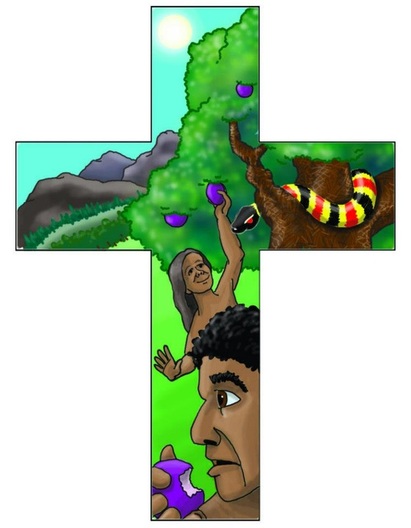 This image depicts Adam and Eve in the moment they decided to believe the lie suggested to them by Satan and turn away from God. (Genesis 3) It is because of this original sin, this first act of disobedience, that death came into the world. Every single person since Adam and Eve has been born into sin because of this moment. And it is precisely because of this moment that we all need Yeshua. It is because of Adam and Eve's choice to disobey God, that Yeshua would have to come and be obedient to God, even to death on the cross, in order to redeem us from our sinful nature. I decided to make the serpent a king snake because it is extremely venomous and the poison of Satan’s deceit in this moment was deadly. The Bible also refers to Satan as the king of this world (2 Corinthians 4:4) and makes it clear that he continues to make every effort to deceive people about the truth of God. In fact, he essentially uses the exact same tactic in everything he does, "Did God really say...?"

"Wherefore, as by one man sin entered into the world, and death by sin; and so death passed upon all men, for that all have sinned:" - Romans 5:12

"For since by man came death, by man came also the resurrection of the dead. For as in Adam all die, even so in Christ shall all be made alive." - 1 Corinthians 15:21-22

*Music "Sycamore Song" used with permission by Bill Horn.
Want to see more of  The Cross Videos?  You can use the links below to navigate through the gallery.
The Patriarchs  >>