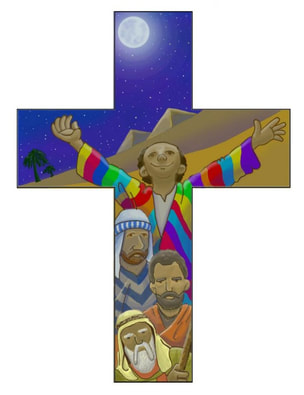 The Patriarchs, the fathers of our faith, are shown in this drawing.  From the bottom up are Abraham, Isaac, Jacob, and finally Joseph.  In the animated drawing, Abraham is drawn and then the stars in the sky are filled in after.  This sequence is a reference to God’s promise to Abraham in Genesis 15:5-6 to number his seed as the stars in the sky.  Jacob’s clothes are inspired by the blue and white star on the flag of Israel.  Jacob was actually renamed Israel and was considered the father of the nation of Israel.  Joseph, in his coat of many colors, is often referred to as a type of Christ because of many similarities in the lives of him and Jesus.  (You can see a great chart of these similarities. )  As such, he has his arms raised in praise position that is also suggestive of crucifixion in the format of the cross shape.  The pyramids are in the background to reference the nation of Jews movement into Egypt through the leadership of Joseph.

*Music "You're the Only One" used with permission from Bill Horn.
Want to see more of  The Cross Videos?  You can use the links below to navigate through the gallery.