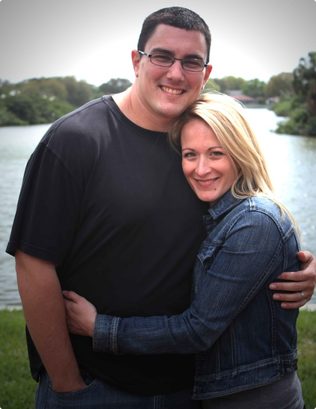 Brett and Jaelle Durbin
Brett had visited the trash dump at Cambodia once before and it was an experience that changed the  direction of his entire life.  He returned for a second trip, this time with a film maker to document the conditions of life for those living on the dump site.  After several days of shooting, they decided to try and get some footage of the dump at night.

Brett was taking a few digital photos as the sun was going down and snapped a photo of the last trash truck of the night driving up the road.  As he took the picture, he was struck by the fact that there were two men standing on top of the cab of the truck, smiling and wildly waving their arms at Brett and his team.  This was very odd, especially considering that everyone who worked at the dump had only glared and cursed Brett's team while they were filming.  As the truck approached, they also noticed that several men were crammed into the cab with the driver.  The driver motioned for them to come over and talk, and the translator for Brett's group obliged.

Immediately the translator returned looking terrified, reporting that the driver had said there were gang members waiting at the bottom of the dump to kill the team and steal their money and equipment.  The group quickly began to retreat down from the top of the dump and it was shortly after that Brett noticed two men following close behind with large metal hooks.  The men quickly began closing the distance as the team rushed to get back into the village.  As they entered back into the relative safety of the village, Brett turned around for one final look and noticed the men pursuing them were now only 10-15 feet away.  Both of the men, however, did not advance but stood instead frozen, looking scared and confused.  And then suddenly they both turned and quickly retreated while looking repeatedly over their shoulders.  One of the members of Brett's team asked him what had just happened and Brett replied, "I don't know, but I think God just saved our lives"

After several days more of shooting footage at the dump, Brett and his team returned home.  At this time, Brett was one of the pastors at a church in Florida.  As expected, everyone at the church was anxious to speak with Brett and hear about his trip.  Still feeling very tired and overwhelmed by the events of the trip, Brett kept the conversations brief.  He was, however, struck by the number of people that asked him about what had happened Tuesday morning.  They all confessed to having an overwhelming experience in which they felt a sudden and intense need to pray for Brett.  It wasn't until later that day that Brett realized that because of the time change, Tuesday morning for his friends at church was actually Monday night for him.  This was precisely when he and his team had escaped the murderous gang members.

Perhaps even more remarkable is what Brett discovered when finally uploading the hundreds of photos taken in Cambodia.  He came across the photo he had taken of the dump truck with the two men smiling and waving on top.  It was precisely these waving men which caught Brett's attention and led them to the truck driver that informed him about the men seeking to kill him and his team.  Amazingly the photo clearly shows the dump truck, however, there is no one standing anywhere on the truck!  (See it in the gallery below!)

It seems clear that God raised up a canopy of prayer to protect Brett and his team as they were being pursued by enemies with the intent to kill them.  And obviously, those men saw something that caused them to fearfully retreat from Brett and his unarmed team.  It is my belief that God sent an angel which physically manifested behind Brett to scare off the men that sought to harm him.  The Bible has numerous descriptions of angels, many of which inspired my painting.  (For those interested, you can read those verses here.)  Furthermore, it would certainly seem that the men on top of the truck were also angels.  The Bible tells us in Hebrews 13:2 that "some have entertained angels unawares".  Angels are Gods messenger, and clearly these angels had a message to deliver to Brett and his team.

Below are a few photos from the Cambodia Dump Site Community that were referenced in creating this painting.