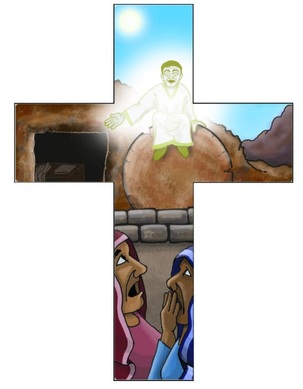 While it was fairly intimidating to take on the crucifixion as a subject to draw, this image was one I was eager and excited to approach.  The imagery is inspired directly from Matthew 28:1-7.  Mary, the mother of Yeshua, and Mary Magdalene are shocked to find an angel sitting on the giant stone that had been rolled away from the doorway of the tomb.  I love the idea of an angel doing something as mundane as sitting on the stone while he waited for the women to approach.   I wanted to also be sure and include a view into the tomb so that you could see the linen and napkin mention in John 20:6-7.  The linen clothes were lying empty, without a body beneath them.  But the napkin, a small cloth that was typically placed over the face of the deceased, had been folded up and set aside separately from the linens.  This was a genius clue left behind from our Savior that easily debunks any deceitful rumors of his body being stolen.  If someone were to steal a body, they certainly wouldn’t take the time to neatly fold up this small cloth.  I like to imagine Yeshua smiling to himself as he took the time to do this before exiting the tomb.

*Music "Never Be the Same" used with permission from Bill Horn.
Want to see more of  The Cross Videos?  You can use the links below to navigate through the gallery.