THE CRUCIFIXION OF YESHUA 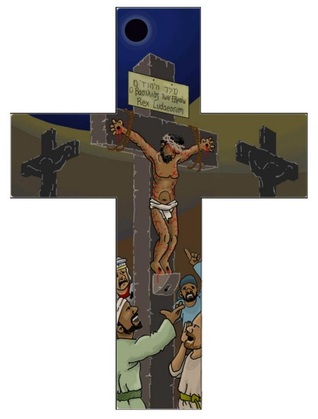 This was an image I was nervous about drawing for quite some time.  I honestly felt a little unworthy to try and portray such a significant event.  After a lot of prayer, and the confidence I gained in having completed nine other drawings, I finally felt prepared to attempt this incident.  I wanted to include as many Biblical details as possible into the drawing.  Knowing that there would be children seeing this I didn’t want to get overly graphic with bloody details.  I did, however, want to make a pronounced reference to the scourging Yeshua received before the crucifixion.  The sign above Yeshua is actually written in Hebrew, Greek, and Latin as noted in John 19:20.  The sun in this painting is shown black in reference the gospels of Matthew, Mark, and Luke which all mention a darkness falling over the land for 3 hours.  Luke 23:45 specifically mentions the sun being darkened.  Beneath Yeshua is a small crowd of people mocking and chastising him, heaping humiliation upon his already enormous suffering.  The Roman soldier who is mentioned in several of the gospels is also shown as he realizes that surely Yeshua was the Son of God.  While there is no way to truly capture the magnitude of what Yeshua did for each one of us by dying on the cross, it is my hope that this image is at least potent enough to cause sincere reflection on his selfless sacrifice.

*Music "Lamb of God" used with permission from Bill Horn.
Want to see more of  The Cross Videos?  You can use the links below to navigate through the gallery.