GOSPELS
THE LIFE OF YESHUA 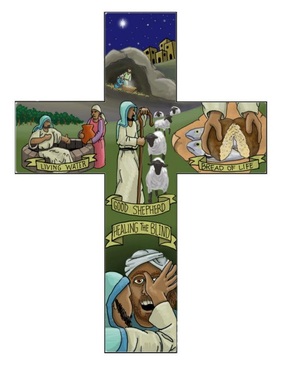 This drawing seeks to portray the claims, character, and works of Yeshua through numerous scenes of his life.  A nativity scene is shown at the top of the image.  The cross beam depicts several of the claims, or “I am” statements Yeshua made about himself through the course of his ministry.  While speaking to a Samaritan woman at a well, Yeshua referred to himself as living water.  He called himself the good shepherd.  And he claimed to be the bread of life, which is shown with a reference to his feeding the 5,000 with 5 loaves and 2 fish.  The bottom of the cross shows an example of one of his many miraculous actions as he heals a blind man.

*Music "Jesus, You" used with permission from Bill Horn.
Want to see more of  The Cross Videos?  You can use the links below to navigate through the gallery.