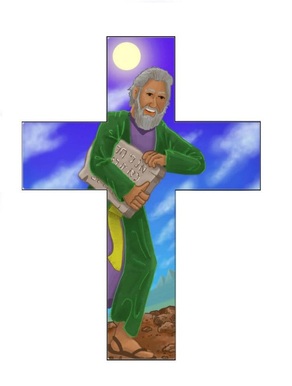 This painting attempts to show Moses on the top of Mount Sinai after receiving the Ten Commandments.  The Egyptian pyramids are once again in the background of the composition.  This time, however, they are far off in the distance as the nation of Israel has been led to freedom by Moses, through the power of God.  The tight format of the cross did not lend itself to creating as strong of a sense of elevation as I had wanted, but I did what I could.  The tablet Moses is carrying does have characters I copied from examples of the commandments written Hebrew.  Moses is clearly elated at having been in the presence of God.

*Music "Never Be the Same" used with permission by Bill Horn.
Want to see more of  The Cross Videos?  You can use the links below to navigate through the gallery.